Fundraising Ethiopia; Western countries and the World bank increasingly sponsor the dictatorial regime of Meles Zenawi, while human rights in the country deteroriate. The aid money is used to entighten the strangling grip on Ethiopian citizens, HRW claims in the report Development without Freedom. The donors (i.e. The Netherlands, EU, UK, US, Canada) are very well aware of how their billions are spend and for what purpose. 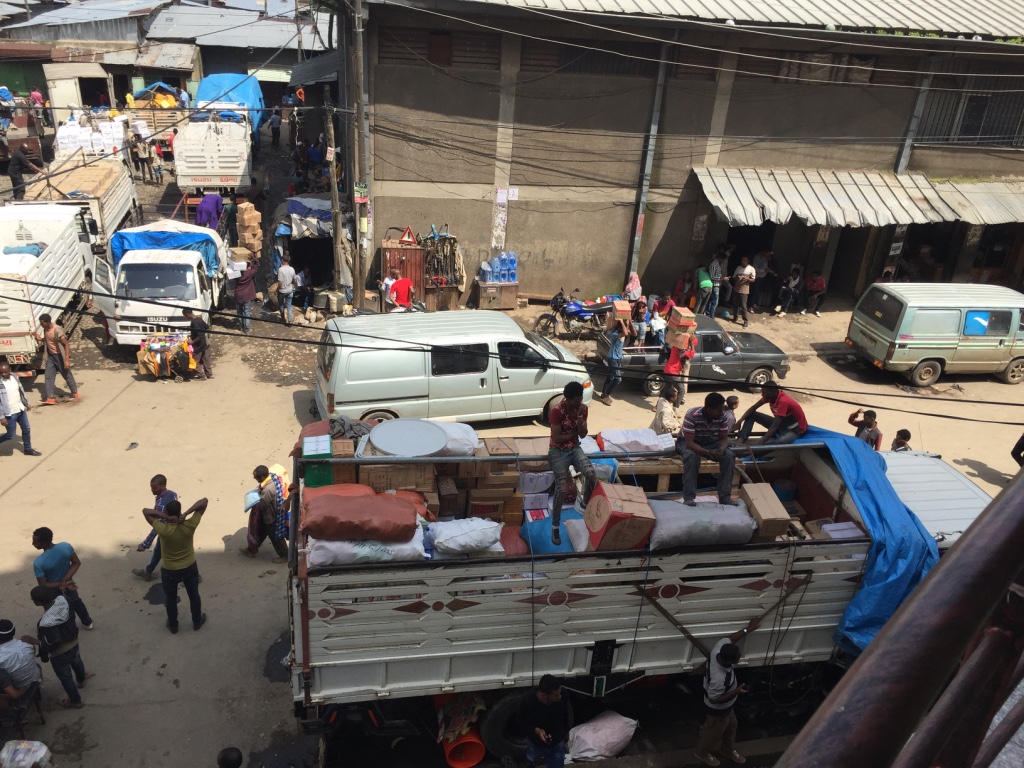 Ethiopia is the second large sponsored developing country in the world, after Indonesia. The country is ruled by a dictatorial regime and human rights deteriorate while the amount of aid money increases. Aid money, according to Human Right Watch, which is used to strengthen the governments’ grip on the citizens even more. And the donors are aware of this.

Ethiopians, who manage to escape their abusive government and ask for asylum abroad, have a hard time to get the refuge they need, if they get it at all. The West turns a blind eye twice; by funding a dictator with billions of dollars and refusing to safe harbour his victims, amongst whom sixteen youngsters craving for freedom.

Landlocked in the horn of Africa live 85 million Ethiopians. They speak approximately 80 tongues, expressing descent, of which Amharic is the main language. The country is praised for its natural beauty and diversity, for the cultural heritage that goes back to the beginning of mankind. Jews, Muslims as well as Christians found refuge in Ethiopia, centuries ago. The country is even praised for reggae music. The river Nile springs in Ethiopia and the coffee (buna) is famous.

Despite the magic hovering over Abyssinia, it is one of the poorest nations in the world with half of its population living under the poverty line. Ethiopia receives $ 3 billion aid money annually, which turns it into the worlds’ second large fundraising nations, according to Human Right Watch in their report ‘Development without freedom’, October 2010.

Development without Freedom describes how Western dollars meant to relieve hunger and poverty are being used by the one party government of Prime Minister Meles Zenawi to oppress dissent and feed fear instead of mouths. Shocking news? Apparently not to the donors (i.e. US, UK, the Netherlands, Canada, EU, Worldbank). HRW writes: ‘Donors defend the decision to support the government by pointing to Ethiopia’s stability— particularly when compared to neighbouring Somalia—and by highlighting the country’s progress in meeting development indicators and in achieving the United Nations Millennium Development Goals.’ (Page 5)

Compared to an ordinary criminal, this would mean; a thief would not be punished for stealing, because the murderer executed a worse crime. And the murder walks free, because his colleague next-door, killed ten people…

As for the Millennium Goals[1]: How to end poverty and hunger, if aid (food, fertilizer, land et cetera) is only given to supporters of the political party in power? What is the value of education, if it foremost contains propaganda for the party in power? What is the meaning of gender equality if citizens aren’t allowed dissent? How to obtain environmental sustainability without social sustainability? And global partnership? Which true democratic government can explain to its people it is partnering and donating big sums of money to dictators?

HRW: ‘Some donor officials also argue that broad economic progress outweighs individual political freedoms’.  Let us look at some of the evidence about the ‘individual political freedoms’ these officials so carelessly play down. The administrative structure of Ethiopia is such that the government can even touch down in households. The lowest level of organisation is the kebele. Its officials are members and supporters of the ruling party. They control communities and even individuals. For identity papers, building, job referrals, one has to go there.

‘In addition, before the May 2010 general elections, reports surfaced of officials leveraging government services to encourage support for the ruling party and punish dissent. Human Rights Watch documented house-to-house intimidation by kebele officials in Addis Ababa who told residents that they would lose their house or even their job if they did not register to vote and cast a ballot for the EPRDF,’ HRW reports on page 40.

HRW is no stand alone whistleblower on the political handcuffs and muzzles that keep the people of Ethiopia under control. Development without Freedom surely is not the first report on large-scale violation of Human Rights by the same regime that rules the country since 1991. Amnesty International, The Ogaden People Solidarity Forum and many others state the same oppression.

Amnesty International Annual Report, Freedom of Expression, 2009: ‘Conditions in Kaliti prison and other detention facilities were harsh – overcrowded, unhygienic and lacking adequate medical care. Among those detained in such conditions were long-term political prisoners held without charge or trial, particularly those accused of links to the OLF.’

The Ogaden People Solidarity Forum quotes Reuters, Nov 3 2009: ‘Ethiopian opposition parties say nearly 450 of their members have been jailed to stop them running as candidates in national elections in May next year.’

The elections mentioned above were held in May 2010 and to no ones surprise, not even their own, were won by the ruling EPRDF. Meles’ party obtained ‘499 of the 547 available parliamentary seats, opposition or independent candidates won two seats, and EPRDF-allied parties won the remaining seats. Additionally, the EPRDF won all but one of 1,904 council seats in regional elections. The opposition had filed appeals with the election board and the Ethiopian Supreme Court, but both appeals were rejected. On July 20, the Court of Cassation, Ethiopia’s highest court, rejected the opposition’s final appeal.’ (Source: Wikipedia)

Amnesty writes in the same annual report of 2009 on Freedom of Expression: ‘Independent journalists continued to face harassment and arrest. At least 13 newspapers shut down by the government in 2005 were still closed. Independent journalists were reportedly denied licences to operate, although others did receive licences. Serkalem Fasil, Eskinder Nega and Sisay Agena, former publishers of Ethiopia’s largest circulation independent newspapers, who had been detained with CUD members, were denied licences to open two new newspapers.’

These are the kind of ‘individual political freedoms’ donor officials argue are less important than economic growth. They seem to think one can build a sustainable society on the fundaments of abuse. By supporting the Meles’ regime the way the donors do, they sacrifice the people who they are meant to help.

‘Paradoxically, as Ethiopia’s human rights situation has steadily declined, donors have simultaneously ramped up assistance. Between 2004 and 2008, the level of development aid to Ethiopia doubled.  Human Rights Watch calls on donors to ensure that their aid is being used in an accountable and transparent manner, and urges national legislatures and audit institutions in donor countries to examine Ethiopia’s use of development aid to undermine basic human rights.’ (HRW, Development without Freedom, page 111)

One of the outcomes of this absurdist, sad story reported by a highly estimated NGO is that who have the opportunity to flee from the country, run. The only reason the rest of the world is not flooded with Ethiopian refugees is, that it is so damn hard to get out. Like stated, one has to obtain papers from the kebele and what on earth does a common man or woman need a passport for? And why would kebele officials provide travel documents to dissidents? Most occupants have neither the money nor the connections to contact a ‘travel agent’, though girls (and sometimes boys) are known to have been trafficked into countries like Dubai and Lebanon to work as slaves in households or as prostitutes.

Children especially street children are exceptionally vulnerable in such a poor and destructive society, claims Unicef[2]. Therefore a non-profit organisation that sets up projects and programmes to support them easily attracts sponsors. Circus Ethiopia is such an organisation. Five youth circuses spread through the country teach children acrobatics and how to play an instrument, like the traditional krar and masenqo.

The largest circus is Circus Addis Ababa. And the main group of Circus Addis Ababa was invited to come to the Netherlands to perform in May 2007. When the youngsters arrived, 6 of them defected immediately, determined not to go back to Ethiopia. The rest asked for asylum, finally telling the stories of their life. A stinking cesspool opened, governmental meddling with the apparently innocent organisation for street children shows how the prevalence of economic growth over individual political freedom can destroy lives. Abuse of power, sexual abuse, child labour, slavery and torture colour the life stories of the youngsters black.

You can read more on in Part two of ‘The blind eye of the West’, published soon on nonfiXe.

[2] Grim statistics by Unicef: Many street children […] don’t have access to basic rights such as proper care, education, psychological support and supervision. Often, orphans and other vulnerable children are forced to work to earn an income. They are exposed to various forms of exploitation, including sexual exploitation.